“The whole machine isn’t possible. Personally, I believe color television to be impossible too. But since it does exist, I will act as if I believed in it. We must do the same for the Energy Damper.”
— Illya Kuryakin, in The Man from U.N.C.L.E.: The Dagger Affair, by David McDaniel

In the world of Metamor City, magic and technology evolve side by side. This juxtaposition makes for a delightful variety of stories, and suggests that The Metamor City Podcast will have something for everyone to enjoy. Still, it raises1 a worrisome question. We know what technology is: it’s applying what we know about how the physical universe functions — e.g., physics (and its parent, mathematics), chemistry, biology — to the performance of “work,” i.e., getting physical tasks done.2 But what exactly is magic?

Everyday usage tells us that the word refers to things we don’t know or understand. It’s a fall-back category: when we can’t chalk a phenomenon up to one science or another, we tend to say “It’s magic!” Or, as the sign reads behind the counter in Artax’s SPELLS-4-U shop:

BECAUSE I’M A WIZARD,
THAT’S HOW

One can easily see how Clarke derived his famous Third Law: “Any sufficiently advanced technology is indistinguishable from magic.” He wasn’t saying that such technology is magic, mind you; rather, that it is equally alien to what we know and understand. It does not follow any rules we’re aware of. It is not derived from our science.

Truth is stranger than fiction … but it can afford to be

In thus framing the Third Law, Sir Arthur highlights what I believe to be the central element of “magic” as we use the term: It does not follow rules. And here is where it gives SFF writers a headache.

Stories, you see, have to make sense. You can’t just pull your readers to the cliff, hang them there, say “and then suddenly a miracle occurs,” and off they go to the next episode. There has to be an explanation of some sort, and readers had better find it worth putting them through all that. Inexplicable things happen in reality, but they don’t make credible fiction.

Furthermore, stories concern characters who Do Things by putting resources to work. The moment we acknowledge magic as an outlaw force in the universe, we disqualify it as a positive element of a story. It becomes only the arbitrary expression of some powerful, inscrutable entity’s will, or else a completely random occurrence. Either way, it isn’t something a human (or human-substitute, e.g., hobbit) character can use; it only gets in the way of thoughtful action. How can a wizard know what he or she is doing if there are no principles to follow?

C’mon, Merlin, do the math

I must also confess a fondness for authors who, moved by their God-given3 drive to bring order out of chaos, try to institute principles and rules for magic as well as science. One example is Diane Duane, in whose superb Young Wizards series using the wizard’s handbook is much like operating an advanced computing device (indeed, in High Wizardry an Apple III is overhauled to serve as a handbook), wizards manage multidimensional gates between worlds and even worldlines, and developing new spells requires a considerable intuitive grasp of the mathematics involved. Another example is Randall Garrett, in whose Lord Darcy mysteries forensic sorceror Sean O Lochlainn invokes not only the famous Laws of Contagion and Similarity but a basketful of others as well. The influence of these and many other writers on Elisabeth Waters’s and my “Treasures” series of stories is obvious.

“The rules of magic” … aye, there’s the rub. When you and I use the word magic in daily life4 we’re thereby saying we don’t know the rules. Otherwise it wouldn’t be magic. The Kuhnian process of observing data, sorting them into patterns (there’s that order-out-of-chaos thing again), and expressing those patterns as principles and “paradigms” would have reached fruition, et voilà: Science. The principles would then be applied to the business of Getting Things Done in the world, and thus we would have Technology.

Let the mage sort ’em out

Clearly, then, we need to come to some kind of halfway point, to understand Magic in a way that makes it usable in fictional life. Given that we humans cannot consciously use a tool without knowing something about it (even if it’s only “Pick it up by this end, and for the love of Patrick don’t touch that little red bumpy thing!”), I offer the following as an initial statement of Spence’s First5 Taxonomic Principle:6

What we call “magic” may be treated as the product of technology, personal attribute, or diplomacy.

Technology: The occurrence is based on observable, impersonal principles underlying the created universe. We simply haven’t observed them yet. But Artax has, as have Harry Dresden, Juanita and Kit, Albus Dumbledore, and their colleagues. They call it Magic, but if we knew what they knew we would probably call it Science.7

In this category I would place any magic that the average man or woman on the street can do,8 where all one needs is the proper spellbook, talisman, or other artifact. Potions, or prepare-this-at-home-and-be-very-sure-to-follow-the-directions spells such as the “test drive” spell Artax gives Daniel Sharabi early in Making the Cut, would be examples, as would any power-holding devices such as the amulets that ward off Metamor City’s curse.9 Clarke’s “is indistinguishable from” becomes simply “is.”

Personal attribute: The occurrence is caused by the efforts of some personal entity using his or her intrinsic abilities. Here we leave the impersonal power for the personal. This category includes not only vampires (or, as Fred Saberhagen’s Dracula calls them, the non-breathing branch of humanity), but also those with psychic abilities, such as Daniel and his fellow members of the Psi Collective. It also includes any situation where just knowing the words isn’t enough; one has to have a Talent as well (e.g., the Harry Potter books, Laura Anne Gilman’s Retrievers novels, or Elisabeth’s and my “Treasures” stories.)

Diplomacy: If you cannot do something yourself, negotiate with someone or something else who can. Thus we summon spirits, and leave milk-&-cakes offerings for brownies. Or, in Gilman’s Retrievers stories, cut a deal with the fatae.

One can see various uses or combinations of these three categories in most stories that use magic. An intriguing mix of personal attribute and (a kind of) diplomacy, for example, is Philippa Ballantine’s excellent New Zealand alternate-history novel Weather Child, in which magic is the collaborative product of certain humans and the land-arisen symbiotic beings riding shotgun in their cells: the symbionts, referred to as seraphim, supply the power, and the humans direct and apply it as needed. The mystery is not only in how these people (whose relationships with their seraphim are as varied as they themselves are) can function in society, but also in what the symbionts actually are and what they intend for their world.

In conclusion: The business of magic

The alert reader will have already made two observations concerning the above-stated principle. First, it reveals the distinction between fantasy and science fiction to be far more blurry than is usually believed — if it ever was fair to make this an either-or matter. In fact, we might as well map such stories on a field of at least two dimensions, one of which represents the degree of specific reference to today’s hard sciences. (The other dimension[s] I leave as an exercise for the student.)

The second observation is that these three categories fit not only magic but any human endeavor, such as business. To get something done, you use the tools at hand, you put your own skills to work, and if necessary you call upon those who can do the job better than you. 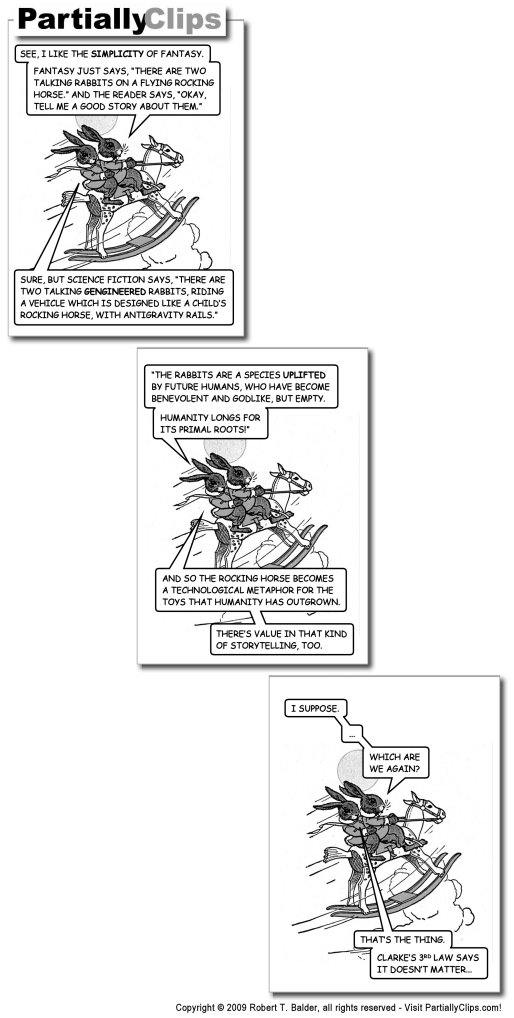 This entry was posted in SFF: Writings, Writing: The process. Bookmark the permalink.

2 Responses to Metamor City Sidebar: What IS magic, anyway?

Hi! Please let me know what you think! Cancel reply

This site uses Akismet to reduce spam. Learn how your comment data is processed.